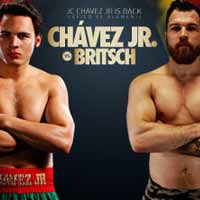 Review by AllTheBestFights.com: 2016-12-10, Julio Cesar Chavez Jr vs Dominik Britsch gets three stars thanks to a good second part of the fight.

The former Wbc Mw champion Julio Cesar Chavez Jr entered this fight with a pro boxing record of 49-2-1 (32 knockouts) while his opponent, Dominik Britsch, has a record of 32-2-1 (11 knockouts). Chavez Jr has fought twice last year losing to Andrzej Fonfara (=Chavez Jr vs Fonfara) and beating Marcos Reyes (=Chavez Jr vs Reyes) while Britsch has fought once in 2016 winning over Slavisa Simeunovic. Chavez vs Britsch is the main event of the evening. Watch the video and rate this fight!