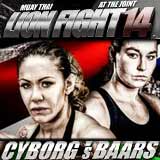 Review: 2014-03-28, exciting back and forth battle between Cris Cyborg Santos and Jorina Baars: it is close to get four stars. Cristiane ‘Cyborg’ Santos Justino entered this fight with a professional kickboxing record of 2-0-0 (12-1-0 in mma), last year she came back to fight in a muay thai bout (after his first fight in 2006) beating Jennifer Colomb in three exciting rounds (=Cyborg vs Colomb).
Her opponent, the undefeated Jorina Baars, has an official record of 35-0-3 and she was muay thai world champion twice, but her last muay thai bout was in 2011, since then he started fighting in mma but her record is not one of the best ones: 1 victory and 3 losses. Cris ‘Cyborg’ Justino vs Baars is valid for the women’s welterweight Lion Fight title; undercard of Gregory Choplin vs Marco Pique – Lion Fight 14. Watch the video and rate this fight!