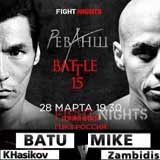 Review: 2014-03-28, pretty good fight between Mike Zambidis and Batu Khasikov: it gets three stars. Mike Zambidis entered this fight with a professional kickboxing record of 153-22-0 (86 knockouts), he fought just once in 2013 defeating Harun Kina (=Zambidis vs Kina) but he has already fought in 2014 losing to the Chinese Xu Yan (=Zambidis vs Xu Yan).
His opponent, Batu Khasikov, has an official record of 67-17-3 (35 knockouts), he suffered his last defeat in 2009 when he faced Ricardo Fernandes (bout valid for the WAKO light middleweight world title) but in 2010 Khasikov won the rematch. Zambidis vs Khasikov 2 is valid for the WKN world title (-72.6 kg) and it is the main event of “Fight Nights: Battle of Moscow 15”; in their first fight Khasikov defeated Zambidis in the first round via tko (doctor stoppage) due to a jaw fracture of the Greek. Watch the video and rate this fight!