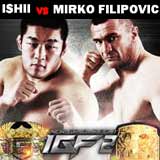 Review: 2014-08-23, fight not particularly good between Satoshi Ishii and Mirko ‘Cro Cop’ Filipovic: it gets two stars. The 2008 Olympic judo gold medalist (+100 kg) Satoshi Ishii entered this fight with a professional mma record of 12-2-1 (42% finishing rate) and he is ranked as the No.27 heavyweight in the world, he suffered his last defeat in 2011 when he faced Fedor Emelianenko (=Fedor vs Ishii), since then he has collected eight consecutive victories winning at the ned of 2013 the IGF Hw title defeating Kazuyuki Fujita (=Ishii vs Fujita).
His opponent, the black belt in tae-kwon-do and former K-1 and Pride world champion Mirko ‘Cro Cop’ Filipovic, has an official record of 28-11-2 (89% finishing rate) but he lost four out of his last five mma fights. Cro Cop vs Ishii, main event of Inoki Genome Fight 2, is valid for the IGF heavyweight title (Ishii’s first defense). Watch the video and rate this fight!

Their next fight: Mirko ‘Cro Cop’ Filipovic vs Satoshi Ishii 2