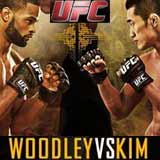 Review: 2014-08-23, pretty good finish between Tyron Woodley and Dong Hyun Kim but it is not enough to get three stars (UFC Performance of the Night). Tyron Woodley entered this fight with a pro mma record of 13-3-0 (69% finishing rate) and he is ranked as the No.6 welterweight in the world (currently the #1 in this division is Georges St Pierre), he has already fought twice in 2014 beating Carlos Condit (=Condit vs Woodley) but then he was defeated by Rory MacDonald (=MacDonald vs Woodley).
His opponent, the balck belt in Judo and Brazilian jiu-jitsu Dong Hyun Kim, has an official record of 19-2-1 (47% finishing rate) and he entered as the No.9 in the same weight class, he suffered his last defeat in 2012 when he faced Demian Maia (=Maia vs Kim), since then he has fought and won four times. In his last bout he defeated John Hathaway in one of the best mma fights of the year (=Kim vs Hathaway). Woodley vs Kim is on the undercard of Michael Bisping vs Cung Le – UFC FN 48. Watch the video and rate this fight!