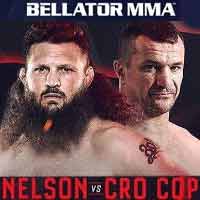 Review by AllTheBestFights.com: 2019-02-16, disappointing fight between Mirko Filipovic and Roy Nelson 2: it gets two stars.

The black belt in tae-kwon-do, former K-1 and Pride champion Mirko Cro Cop Filipovic entered this fight with a professional record of 37-11-2 (92% finishing rate) and he is ranked as the No.18 heavyweight in the world. He suffered his last loss when he faced Alexey Oleinik in 2013 (Filipovic vs Oleinik), since then he has won nine consecutive bouts winning the 2016 Rizin Open-Weight Grand Prix tournament beating Amir Aliakbari in the final (Mirko Cro Cop Filipovic vs Amir Aliakbari) and defeating Tsuyoshi Kohsaka and Roque Martinez in 2017 and 2018 (Mirko Cro Cop Filipovic vs Roque Martinez).
His opponent, the black belt in Brazilian jiu-jitsu and Tuf Hw tournament winner Roy Nelson, has a mma record of 23-16-0 (83% finishing rate) and he entered as the No.24 in the same weight class but he won just one out of his last three fights, against Javy Ayala (Roy Nelson vs Javy Ayala); after this bout he lost to Matt Mitrione (Roy Nelson vs Matt Mitrione 2) and Sergei Kharitonov (Roy Nelson vs Sergei Kharitonov). In their first fight Filipovic had lost to ‘Big Country’ Nelson via tko (October 29, 2011 – Roy Nelson vs Cro Cop Filipovic I); Cro Cop vs Nelson 2 is on the undercard of Michael Page vs Paul Daley – Bellator 216. Watch the video and rate this fight!