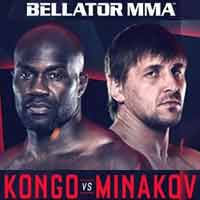 Review by AllTheBestFights.com: 2019-02-16, fight not so exciting between Vitaly Minakov and Cheick Kongo 2: it gets two stars.

The undefeated black belt in judo, former Bellator and world combat sambo champion Vitaly Minakov entered this fight with a perfect mma record of 21-0-0 (90% finishing rate) but he is not ranked as he hasn’t fought since December 16, 2017 when he beat Tony Johnson (Vitaly Minakov vs Tony Johnson); before this bout, in 2017, he had also won over DJ Linderman (Minakov vs Linderman) and Antonio Bigfoot Silva (Minakov vs Silva).
His opponent, the black belt in karate and kendo Cheick Kongo, has an official record of 29-10-2 (62% finishing rate) and he entered as the No.14 heavyweight in the world. He lost to Muhammed ‘King Mo’ Lawal in 2015 (Lawal vs Kongo) but then he has won seven bouts beating Javi Ayala (Cheick Kongo vs Javy Ayala) and Timothy Johnson (Cheick Kongo vs Timothy Johnson). In their first fight Kongo was defeated by Minakov via unanimous decision (April 4, 2014 – Vitaly Minakov vs Cheick Kongo I); this second bout is on the undercard of Michael Page vs Paul Daley – Bellator 216. Watch the video and rate this fight!