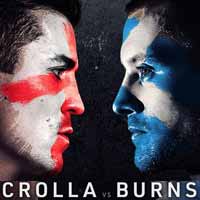 Review by AllTheBestFights.com: 2017-10-07, pretty good fight between Anthony Crolla and Ricky Burns: it gets three stars.

The former Wba Lw champion Anthony Crolla entered this fight with a boxing record of 31-6-3 (13 knockouts) and he is ranked as the No.12 lightweight in the world but he comes two consecutive losses, both suffered with Jorge Linares (=Crolla vs Linares I and Linares vs Crolla II). Before these two defeats he had won over Ismael Barroso (=Crolla vs Barroso).
His opponent, the former world champion in three different weight classes Ricky Burns, has an official record of 41-6-1 (14 knockouts) and he entered as the No.15 super lightweight. In his last three fights he has beat Michele Di Rocco (=Burns vs Di Rocco) and Kiryl Relikh (=Burns vs Relikh) but then he has lost to Julius Indongo (=Burns vs Indongo). Anthony Crolla vs Ricky Burns is the main event of the evening. Watch the video and rate this fight!