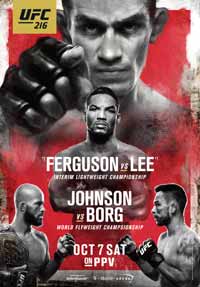 Review by AllTheBestFights.com: 2017-10-07, good finish between Fabricio Werdum and Walt Harris: it gets three stars.

The black belt in judo, Brazilian jiu-jitsu and former Ufc Hw champion Fabricio Werdum entered this fight with a mma record of 21-7-1 (76% finishing rate) and he is ranked as the No.3 heavyweight in the world but he lost two out of his last three bouts, against current #1 Stipe Miocic (=Werdum vs Miocic) and with Alistair Overeem (=Werdum vs Overeem 3). Between these two fights he had beat Travis Browne (=Werdum vs Browne 2).
His opponent, Walt Harris (who replaces Derrick Lewis), has an official record of 10-5-0 (100% ko/tko victory rate – he has never won via submission) and he entered as the No.47 in the same weight class. He lost to Shamil Abdurakhimov last year but then he has won over Chase Sherman and Cyril Asker. Fabricio Werdum vs Walt Harris is on the undercard of Tony Ferguson vs Kevin Lee – UFC 216. Watch the video and rate this fight!