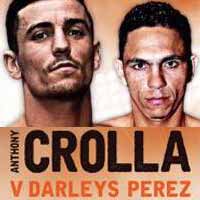 Review by AllTheBestFights.com: 2015-07-18, some good exchanges in the second part of the fight but it is not enough to get three stars: Anthony Crolla vs Darleys Perez gets two.

Anthony Crolla entered this fight with a pro boxing record of 29-4-2 (11 knockouts) and he is ranked as the No.17 lightweight in the world. He suffered his last defeat in 2012 when he faced Gary Sykes, since then he has collected five victories and two draws.
His opponent, Darleys Perez, has a record of 32-1-0 (20 knockouts) and he entered as the No.16 in the same weight class. His only loss occurred in 2013 when he faced Yuriorkis Gamboa (=Gamboa vs Perez), since then he has won four bouts beating Jonathan Maicelo in his last fight (=Perez vs Maicelo). Crolla vs Perez is valid for the WBA World lightweight title; undercard of Scott Quigg vs Kiko Martinez. Watch the video and rate this fight!