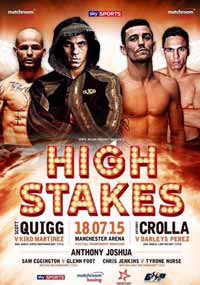 Review by AllTheBestFights.com: 2015-07-18, fight not particularly good between Martin Murray and Mirzet Bajrektarevic: it gets two stars.

Martin Murray entered this fight with a boxing record of 30-2-1 (13 knockouts) and he is ranked as the No.8 super middleweight in the world (currently the #1 in this division is Andre Ward) while his opponent, Mirzet Bajrektarevic, has an official record of 14-3-0 (8 knockouts). Murray has already fought twice in 2015 losing to Gennady Golovkin (=Golovkin vs Murray) and winning over George Beroshvili (=Murray vs Beroshvili). Murray vs Bajrektarevic is on the undercard of Scott Quigg vs Kiko Martinez. Watch the video and rate this fight!