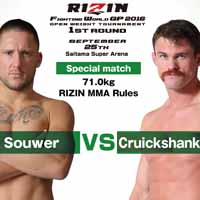 Review by AllTheBestFights.com: 2016-09-25, fight not particularly good between Andy Souwer and Daron Cruickshank: it gets two stars.

The two time K-1 World Max champion Andy Souwer is at his second pro mma fight, 1-0-0 (1 knockouts – but he has a kickboxing record of 159-19-1) while his opponent, the black belt in tae-kwon-do Daron Cruickshank, has an official record of 17-8-0 (65% finishing rate) and he entered as the No.72 lightweight in the world. Souwer debuted in mma last year, against Yuichiro Nagashima (=Souwer vs Nagashima) while the former Ufc fighter Cruickshank comes off the victory over Shinji Sasaki; before this bout Daron had lost three consecutive bouts, the last one with Paul Felder . Souwer vs Cruickshank is on the undercard of Kron Gracie vs Hideo Tokoro – Rizin FF 2016 1st Round. Watch the video and rate this fight!