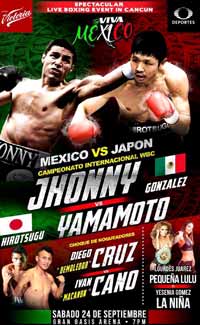 Review by AllTheBestFights.com: 2016-09-24, Jhonny Gonzalez vs Hirotsugu Yamamoto gets three stars thanks to a good finish.

The former world champion in two different weight classes Jhonny Gonzalez entered this fight with a boxing record of 61-10-0 (51 KOs=84%) and he is ranked as the No.19 super featherweight in the world. He lost to Jonathan Oquendo last year (=Gonzalez vs Oquendo) but then he has won three bouts defeating Hurricane Futa (=Gonzalez vs Futa), Justin Savi (=Gonzalez vs Savi) and Christopher Martin (=Gonzalez vs Martin).
His opponent, Hirotsugu Yamamoto, has an official record of 19-12-2 (3 knockouts) and he entered as the No.93 in the same weight class but he comes off the loss against Tsuyoshi Tojo. Gonzalez vs Yamamoto is valid for the WBC International Silver super featherweight title. Watch the video and rate this fight!