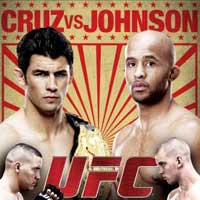 Review: 2011-10-01, good fight between Dominick Cruz and Demetrious Johnson, main fight of the “UFC Live 6”. Cruz defeated Johnson by unanimous decision retaining his UFC Bantamweight belt. Dominick Cruz (18-1-0) entered as the No.1 bantamweight in the world while Demetrious Johnson (9-1-0) entered as the No.6. Watch the video!

Other fights on the card:
Pat Barry vs Stefan Struve
Anthony Johnson vs Charlie Brenneman
Matt Wiman vs Mac Danzig