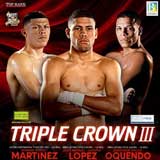 Review: 2011-10-01, pleasant fight with three knockdowns in just two rounds but unfortunately Mike Oliver retires at the end of the second round. Juan Manuel Lopez defeated Oliver by TKO and won vacant WBO Latino featherweight title. “Juanma” Lopez (30-1-0) entered as the No.4 featherweight in the world while Mike Oliver (25-2-0) entered as the No.73. Watch the video!