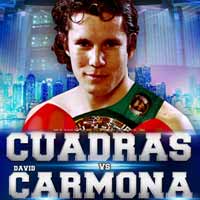 Review by AllTheBestFights.com: 2017-03-18, pretty good fight between Carlos Cuadras and David Carmona: it gets three stars.

The former Wbc super-Flw champion Carlos Cuadras entered this fight with a boxing record of 35-1-1 (27 KOs=77%) and he is ranked as the No.4 super flyweight in the world. ‘Principe’ fought twice last year beating Richie Mepranum (=Cuadras vs Mepranum) and losing to #1 Roman Gonzalez (4-stars fight, Cuadras vs Gonzalez).
His opponent, David Carmona, has a record of 20-3-5 (8 knockouts) and he entered as the No.21 in the same weight class but he comes off the loss against Naoya Inoue (=Inoue vs Carmona). Before this bout he had beat Ricardo Rodriguez in their rematch in 2015 (=Carmona vs Rodriguez 2). Carlos Cuadras vs David Carmona is on the undercard of Gennady Golovkin vs Daniel Jacobs. Watch the video and rate this fight!