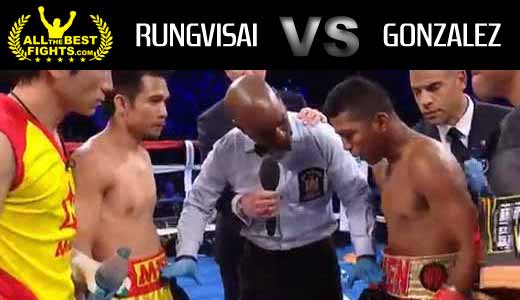 Review by AllTheBestFights.com: 2017-03-18, amazing fight with a tremendous pace and a very exciting finish: Roman Gonzalez vs Srisaket Sor Rungvisai is a candidate for the boxing Fight of the Year 2017 and it gets five stars (this bout was previously rated with four stars but promoted to five since we have not find a better one).

The undefeated Wbc super-Flw champion Roman Gonzalez entered this fight with a perfect record of 46-0-0 (38 KOs=83%) and he is ranked as the No.1 super flyweight in the world. ‘Chocolatito’ fought twice last year winning over McWilliams Arroyo (=Gonzalez vs Arroyo) and Carlos Cuadras (4-stars fight, Cuadras vs Gonzalez).
His opponent, the former Wbc champion Srisaket Sor Rungvisai (also known as Wisaksil Wangek), has an official boxing record of 41-4-1 (38 KOs=93%) and he entered as the No.7 in the same weight class. He suffered his last loss when he faced Carlos Cuadras in 2014 (=Rungvisai vs Cuadras), since then he has won 14 consecutive bouts. Roman Gonzalez vs Wisaksil Wangek is valid for the WBC World super flyweight title (Gonzalez’s first defense); undercard of Gennady Golovkin vs Daniel Jacobs. Watch the video and rate this fight!

Their next fight: Srisaket Sor Rungvisai vs Roman Gonzalez 2