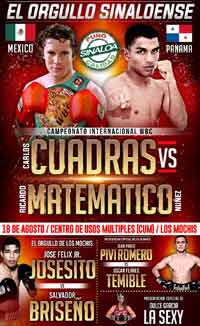 Review by AllTheBestFights.com: 2018-08-18, good exchanges between Carlos Cuadras and Ricardo Nunez: it gets three stars.

The former Wbc super-Flw champion Carlos Cuadras entered this fight with a professional record of 36-3-1 (27 KOs=75%) and he is ranked as the No.9 bantamweight in the world (currently the #1 in this division is Naoya Inoue) but he lost three out of his last four fights, the last two with Juan Francisco Estrada (Carlos Cuadras vs Juan Francisco Estrada) and McWilliams Arroyo (Carlos Cuadras vs McWilliams Arroyo); before these two bouts ‘Principe’ Cuadras had beat David Carmona (Cuadras vs Carmona).
His opponent, Ricardo Nunez, has a boxing record of 29-7-0 (23 KOs=79%) and he entered as the No.110 in the same weight class but he lost two out if his last three fights, with Leduan Barthelemy and Leosdan Nunez; between these two bouts he beat Iwier Henriquez. Cuadras vs Nunez is valid for the vacant WBC Latino bantamweight title. Watch the video and rate this fight!