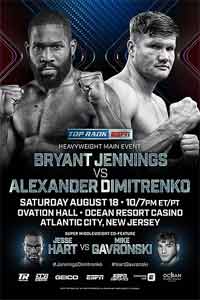 Review by AllTheBestFights.com: 2018-08-18, pretty good finish between Bryant Jennings and Alexander Dimitrenko but it is not enough to get three stars: it gets two.

Bryant Jennings entered this fight with a pro record of 23-2-0 (13 knockouts) and he is ranked as the No.27 heavyweight in the world. He suffered two consecutive losses in 2015, against Wladimir Klitschko (Wladimir Klitschko vs Bryant Jennings) and Luis Ortiz (Bryant Jennings vs Luis Ortiz) but then he has won four bouts beating Akhror Muralimov and Joey Dawejko in 2018.
His opponent, Alexander Dimitrenko, has an official boxing record of 41-3-0 (26 knockouts) and he entered as the No.16 in the same weight class. He lost to Joseph Parker in 2016 (Parker vs Dimitrenko) but then he has won over Milos Dovedan, Adrian Granat (Granat vs Dimitrenko) and Miljan Rovcanin (Alexander Dimitrenko vs Miljan Rovcanin). Jennings vs Dimitrenko is the main event of the evening. Watch the video and rate this fight!

(Free embeddable video hosted on Dailymotion and not uploaded by AllTheBestFights)
https://www.dailymotion.com/video/x6s8npr