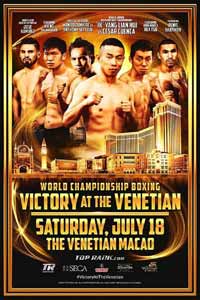 Review by AllTheBestFights.com: 2015-07-18, fight not particularly good between Ik Yang and Cesar Cuenca: it gets two stars.

Both undefeated, the Chinese Ik Yang entered this fight with a perfect boxing record of 19-0-0 (14 knockouts) and he is ranked as the No.29 super lightweight in the world while his opponent, Cesar Rene Cuenca, has a record of 47-0-0 (2 knockouts) but he is not ranked as he hasn’t fought since May 3, 2014 when he defeated Albert Mensah (=Cuenca vs Mensah). Yang has already fought once in 2015 beating Patomsuk Pathompothong (=Yang vs Pathompothong). Yang vs Cuenca is valid for the vacant IBF World super lightweight title. Watch the video and rate this fight!