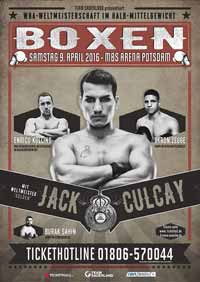 Jack Culcay entered this fight with a professional boxing record of 21-1-0 (10 knockouts) and he is ranked as the No.20 super welterweight in the world. He suffered his only defeat (via split decision) in 2013 when he faced Guido Nicolas Pitto (=Culcay vs Pitto), after this bout he has won six fights taking revenge on Pitto (=Culcay vs Pitto 2) and beating Maurice Weber (=Jack Culcay vs Maurice Weber) and Dennis Hogan in 2015 (=Culcay vs Hogan).
His opponent, Jean Carlos Prada, has an official record of 31-1-1 (22 knockouts) but he is not ranked as he hasn’t fought since January 16, 2015 when he defeated Likar Ramos; before this bout he had lost to Luis Carlos Abregu. Culcay vs Prada is valid for the interim WBA World super welterweight title. Watch the video and rate this fight!