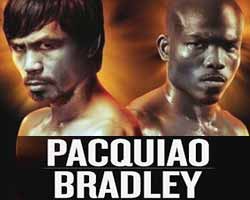 Review by AllTheBestFights.com: 2016-04-09, good fight between Manny Pacquiao and Timothy Bradley Jr 3: it gets three stars.

The former world champion in eight different weight division Manny Pacquiao has a boxing record of 57-6-2 (38 knockouts) and he entered as the No.1 welterweight in the world. He suffered two consecutive defeats in 2012, against Timothy Bradley (their first fight – but it was a controversial decision – Bradley vs Pacquiao I) and Juan Manuel Marquez (fight of the year 2012 by The Ring magazine, Pacquiao vs Marquez 4); after this fight he has won three bouts taking revenge on Bradley in their rematch (=Pacquiao vs Bradley II) but then he lost the “Fight of the Century” against Floyd Mayweather Jr (even if PacMan had suffered a shoulder injury before the bout, Mayweather vs Pacquiao).
His opponent, the former world champion in two different weight classes Timothy Bradley Jr, has an official record of 33-1-1 (13 knockouts) and he entered as the No.3 in the same weight class. After losing against Pacquiao in 2014, he drew with Diego Gabriel Chaves (=Bradley vs Chaves) and he won over Jessie Vargas (=Bradley vs Vargas) and Brandon Rios (=Bradley vs Rios). Pacquiao vs Bradley 3 is valid for the vacant WBO International welterweight title. Watch the video and rate this fight!

Report broken video
« 2016 BOXING fight – Oscar Valdez vs Evgeny Gradovich – fight Video
2016 BOXING fight – Jack Culcay vs Jean Carlos Prada – full fight Video WBA »
HELP US!!! Since the CORONAVIRUS pandemic started, AllTheBestFights.com has struggled to survive! If you have enjoyed this website for the past 10 years, today we ask you for a little help: