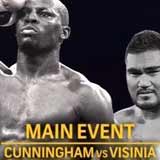 Review: 2014-10-18, tough and entertaining fight between Steve Cunningham and Natu Visinia: it gets three stars. The former Ibf cruiserweight world champion Steve Cunningham entered this fight with a professional boxing record of 27-6-0 (12 knockouts) and he is ranked as the No.13 heavyweight in the world, he suffered two consecutive defeats between 2012 and 2013, against Tomasz Adamek (=Adamek vs Cunningham 2) and Tyson Fury (=Fury vs Cunningham), but then he came back to win beating Manuel Quezada and Amir Mansour (4-stars-fight Mansour vs Cunningham).
His opponent, the undefeated Natu Visinia, has a perfect record of 10-0-0 (8 KOs=80%) but he has not faced any notable opponents in his professional career. Cunningham vs Visinia is the main event of the evening. Watch the video and rate this fight!