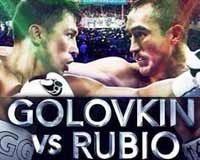 Review: 2014-10-18, pretty good fight between Gennady Golovkin and Marco Antonio Rubio: it gets three stars. The undefeated Gennady Golovkin entered this fight with a perfect boxing record of 30-0-0 (27 KOs=90%) and he is ranked as the No.1 middleweight in the world, he has already fought twice in 2014 beating Osumanu Adama (=Golovkin vs Adama) and Daniel Geale (=Golovkin vs Geale).
His opponent, Marco Antonio Rubio, has an official record of 59-6-1 (51 KOs=86%) and he entered as the No.14 in the same weight class, he suffered his last loss in 2012 when he faced then-undefeated Julio Cesar Chavez Jr (=Chavez Jr vs Rubio); since then he has won six consecutive bouts and in his last fight he beat Domenico Spada winning the interim Wbc Mw title (=Rubio vs Spada). ‘GGG’ Golovkin vs Rubio was valid for the WBA, IBO and interim WBC middleweight titles (the first two belts held by Golovkin); ‘El Veneno’ Rubio failed to make weight losing his interim Wbc belt that becomes vacant and all titles are not on the line for the Mexican boxer. Watch the video and rate this fight!