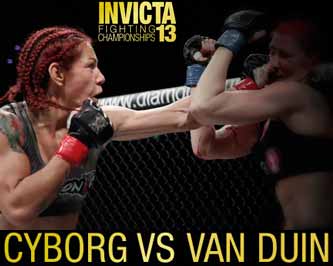 Review by AllTheBestFights.com: 2015-07-09, one sided fight between Cris Cyborg Justino and Faith Van Duin: it gets two stars.

The former Strikeforce women’s Fw champion Cristiane Cyborg Justino (formerly known as Cris ‘Cyborg’ Santos) entered this fight with a professional mma record of 13-1-0 (85% ko/tko victory rate – she has never won via submission) and she is ranked as the No.1 women’s featherweight in the world. She suffered her only defeat in 2005 at her professional mma debut, against Erica Paes, since then she has collected 13 victories and one no-contest (when she tested positive for stanozolol in 2011 against Hiroko Yamanaka, Cyborg vs Yamanaka); in her last bout she beat Charmaine Tweet (=Justino vs Tweet).
His opponent, Faith Van Duin, has an official record of 5-1-0 (80% finishing rate) and she entered as the No.6 in the same weight class. She lost to Arlene Blencowe in 2014 but she came back to win in 2015 defeating Amanda Bell. Cyborg vs Van Duin, main event of Invicta FC 13, is valid for the Invicta FC featherweight title (Justino’s second defense). Watch the video and rate this fight!