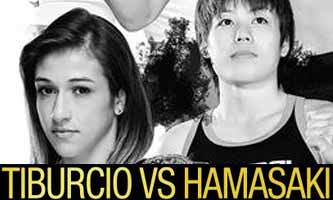 Review by AllTheBestFights.com: 2015-07-09, good fight between Herica Tiburcio and Ayaka Hamasaki: it gets three stars.

The youngest champion in Invicta FC history Herica Tiburcio (she is 22 years old) entered this fight with a pro mma record of 9-2-0 (78% submission victory rate – she has never won via ko/tko) and she is ranked as the No.1 women’s atomweight in the world. Tiburcio suffered two consecutive defeats between 2012 and 2013, against Camila Lima and Claudia Gadelha, but since then she has won four bouts beating Michelle Waterson in his last fight (=Waterson vs Tiburcio).
His opponent, the black belt in judo Ayaka Hamasaki, has a record of 11-1-0 (55% finishing rate) and she entered as the No.2 in the same weight class. She lost to Claudia Gadelha in 2013 as well but then she came back to win beating Naho Sugiyama and Mei Yamaguchi. Tiburcio vs Hamasaki is valid for the Invicta FC atomweight title (Tiburcio’s first defense); undercard of Cris ‘Cyborg’ Justino vs Faith Van Duin. Watch the video and rate this fight!