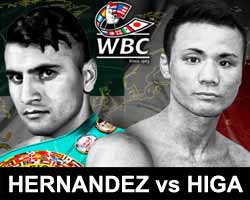 Review by AllTheBestFights.com: 2017-05-20, good finish between Juan Hernandez and Daigo Higa: it gets three stars.

The Wbc Flw champion Juan Hernandez Navarrete entered this fight with a boxing record of 34-2-0 (25 knockouts) and he is ranked as the No.3 flyweight in the world (currently the #1 in this division is Donnie Nietes). He suffered his last loss when he faced Kazuto Ioka in 2011 (=Ioka vs Hernandez), since then he has collected 16 consecutive victories beating Dixon Flores and Nawaphon Por Chokchai in 2016 (=Hernandez vs Nawaphon).
His opponent, the undefeated 21-year-old Daigo Higa (9 years younger than Hernandez), has a perfect record of 12-0-0 (12 KOs=100%) and he entered as the No.9 in the same weight class. In his last three bouts he has won over Ardin Diale, Felipe Cagubcob Jr and Diomel Diocos. Daigo Higa vs Juan Hernandez is valid for the vacant WBC World flyweight title; undercard of Hassan N’Dam vs Ryota Murata. Watch the video and rate this fight!