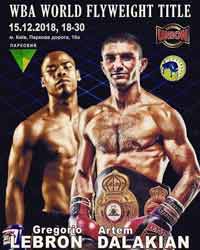 Review by AllTheBestFights.com: 2018-12-15, fight not so exciting between Artem Dalakian and Gregorio Lebron: it gets two stars.

The undefeated Wba Flw champion Artem Dalakian entered this fight with a perfect boxing record of 17-0-0 (12 knockouts) and he is ranked as the No.3 flyweight in the world (currently the #1 in this division is Cristofer Rosales). In his last three bouts he has won over Luis Manuel Macias, Brian Viloria (Brian Viloria vs Artem Dalakian) and Yodmongkol Vor Saengthep (also known as Sirichai Thaiyen, Artem Dalakian vs Yodmongkol Vor Saengthep).
His opponent, Gregorio Lebron, has a record of 21-4-0 (16 KOs=76%) and he entered as the No.54 in the same weight class. He lost two consecutive bouts between 2015 and 2016, both against Yutthana Kaensa, but then he has won eight fights beating Dionis Martinez and Kelvin Figaro in 2018. Dalakian vs Lebron is valid for the WBA World flyweight title (Dalakian’s second defense). Watch the video and rate this fight!