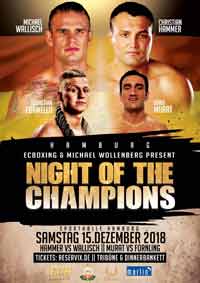 Review by AllTheBestFights.com: 2018-12-15, great performance by both boxers: Karo Murat vs Sven Fornling gets three stars.

The Ibo light-Hw champion Karo Murat entered this fight with a boxing record of 32-3-1 (21 knockouts) and he is ranked as the No.12 light heavyweight in the world. He lost to Sullivan Barrera in 2015 (Barrera vs Murat) but then he has won five bouts defeating Dominic Boesel (Dominic Boesel vs Karo Murat) and Travis Reeves in his last two (Karo Murat vs Travis Reeves).
His opponent, Sven Fornling, has an official record of 14-1-0 (7 knockouts) and he entered as the No.31 in the same weight class. He suffered his only loss when he faced Yevgenii Makhteienko in 2016, after this bout he has won four consecutive fights. Murat vs Fornling is valid for the IBO World light heavyweight title (Murat’s first defense). Watch the video and rate this fight!