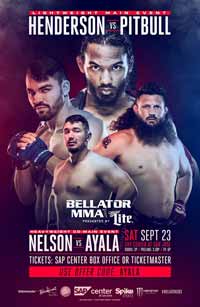 Review by AllTheBestFights.com: 2017-09-23, pretty good finish between Lorenz Larkin and Paul Daley but it is not enough to get three stars: it gets two.

Lorenz Larkin entered this fight with a pro mma record of 18-6-0 (61% ko/tko victory rate – he has never won via submission) and he is ranked as the No.16 welterweight in the world but he comes off the loss against Douglas Lima (=Lima vs Larkin).
His opponent, Paul Daley, has a record of 39-15-2 (79% finishing rate) and he entered as the No.46 in the same weight class. Semtex loss two out of his last three bouts, against Douglas Lima (=Daley vs Lima) and Rory MacDonald (=MacDonald vs Daley); between these two fights he beat Brennan Ward (4-stars fight, Daley vs Ward). Paul Daley vs Lorenz Larkin is on the undercard of Benson Henderson vs Patricky Freire – Bellator 183. Watch the video and rate this fight!