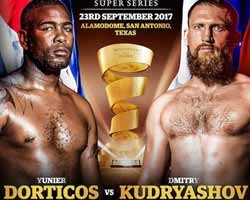 The undefeated Wba Cw champion Yunier Dorticos entered this fight with a perfect record of 21-0-0 (20 KOs=95%) but he is not ranked as he hasn’t fought since May 20, 2016 when he defeated Youri Kayembre Kalenga (=Kalenga vs Dorticos). Before this bout, in 2015 he had won also over Fulgencio Zuniga and Galen Brown.
His opponent, Dmitry Kudryashov, has an official boxing record of 21-1-0 (21 KOs=100%) and he entered as the No.10 cruiserweight in the world (currently the #1 in this division is Oleksandr Usyk). He suffered his only loss when he faced Olanrewaju Durodola in their first fight in 2015 (via tko in the second round, Kudryashov vs Durodola I), after this bout he has beat Julio Cesar Dos Santos, Santander Silgado and he has taken revenge on Durodola (=Kudryashov vs Durodola II). Dmitry Kudryashov vs Yunier Dorticos is the quarter final of the World Boxing Super Series cruiserweight tournament and it is valid for the WBA World cruiserweight title. Watch the video and rate this fight!