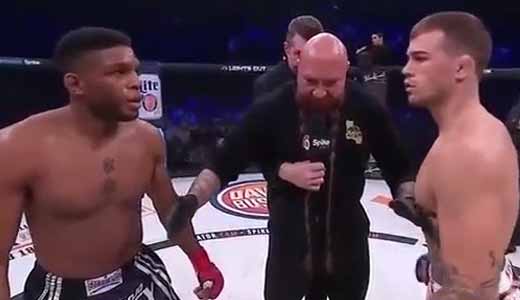 Review by AllTheBestFights.com: 2017-01-21, spectacular finish between Paul Daley and Brennan Ward: this is one of the best mma fight of 2017 and it gets four stars!

Paul Daley entered this fight with a pro mma record of 38-14-2 (79% finishing rate) and he is ranked as the No.73 welterweight in the world but ‘Semtex’ comes off the loss against Douglas Lima (=Daley vs Lima).
His opponent, the Bellator Mw tournament winner (season nine) Brennan Ward, has a record of 14-4-0 (93% finishing rate) and he entered as the No.58 in the same weight class. He fought twice last year losing to Evangelista ‘Cyborg’ Santos (=Ward vs Cyborg Santos) and winning over Saad Awad. Paul Daley vs Brennan Ward is on the undercard of Tito Ortiz vs Chael Sonnen – Bellator 170. Watch the video and rate this fight!