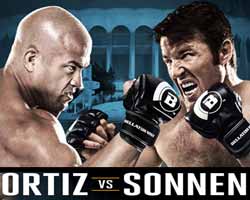 Review by AllTheBestFights.com: 2017-01-21, good start between Tito Ortiz and Chael Sonnen: it gets three stars.

The former Ufc light-Hw champion Tito Ortiz entered this fight with a professional mma record of 18-12-1 (67% finishing rate) but he is not ranked as he hasn’t fought since September 19, 2015 when he was defeated by Liam McGeary (=McGeary vs Ortiz).
His opponent, Chael Sonnen, has an official record of 28-14-1 (43% finishing rate) and he is also not ranked as he hasn’t fought since November 16, 2013 when he lost to Rashad Evans (=Evans vs Sonnen). Tito Ortiz vs Chael Sonnen is the main event of Bellator 170. Watch the video and rate this fight!