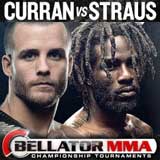 Review: 2013-11-02, some good single shots but the second fight between Pat Curran and Daniel Straus was not so exiting: it gets two stars. Pat Curran (19-4-0, 58% finishing rate) entered as the No.5 featherweight in the world while Daniel Straus (21-4-0, 38% finishing rate) entered as the No.13 (currently the #1 in this weight division is Jose Aldo). In their first fight Curran defeated Straus by ko (April 17, 2009); this second fight is valid for the Bellator featherweight title (Curran’s third defense) and is on the undercard of Michael Chandler vs Eddie Alvarez 2 – Bellator 106. Watch the video!

Their next fight: Daniel Straus vs Pat Curran 3