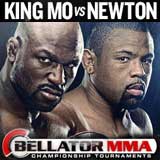 Review: 2013-11-02, some good shots between Muhammed “King Mo” Lawal and Emanuel Newton but it is not enough to get three stars. Muhammed Lawal (11-2-0, 82% finishing rate=ko\tko since he has never won by submission) entered as the No.19 light heavyweight in the world while Emanuel Newton (21-7-1, 52% finishing rate) entered as the No.13 (currently the #1 in this weight division is Jon Jones). In their first fight Newton defeated Lawal by ko (February 21, 2013); this second fight is valid for the interim Bellator light heavyweight title and is on the undercard of Michael Chandler vs Eddie Alvarez 2 – Bellator 106. Watch the video!