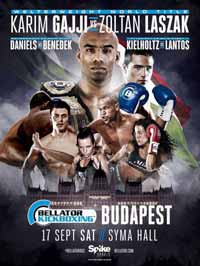 Review by AllTheBestFights.com: 2016-09-17, some good exchanges between Raymond Daniels and Benedek Zsolt but it is not enough to get three stars: it gets two.

The black belt in karate, tae-kwon-do and kenpo Raymond Daniels entered this fight with a kickboxing record of 8-3-0 (7 knockouts) and he is ranked as the No.6 super middleweight in the world while unfortunately we don’t know the record of his opponent, Benedek Zsolt. Daniels lost to Nieky Holzken in 2015 (=Holzken vs Daniels 2) but he came back to win in 2016 defeating Francesco Moricca and Stefano Bruno (=Daniels vs Bruno). Daniels vs Zsolt is on the undercard of Karim Ghajji vs Zoltan Laszak – Bellator Kickboxing 3. Watch the video and rate this fight!