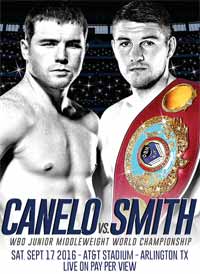 Review by AllTheBestFights.com: 2016-09-17, disappointing fight between Willie Monroe Jr and Gabriel Rosado: it gets two stars.

Willie Monroe Jr entered this fight with a pro boxing record of 20-2-0 (6 knockouts) and he is ranked as the No.13 middleweight in the world. He lost to #1 Mw Gennady Golovkin (Golovkin vs Monroe) but he came back to win in 2016 beating John Thompson.
His opponent, Gabriel Rosado, has a record of 23-9-0 (13 knockouts) and he entered as the No.20 in the same weight class. He suffered three consecutive losses between 2013 and 2014, the last one against David Lemieux (=Lemieux vs Rosado), but then he has won over Joshua Clottey (=Clottey vs Rosado) and Antonio Gutierrez. Monroe vs Rosado is valid for the vacant WBO Inter-Continental middleweight title; undercard of Saul Canelo Alvarez vs Liam Smith. Watch the video and rate this fight!