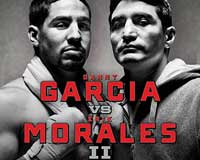 Review: 2012-10-20, pretty good fight and good finish between Danny Garcia and Erik Morales: three stars. The undefeated Danny Garcia (24-0-0) entered as the No.2 light welterweight in the world while Erik Morales (52-8-0) entered as the No.32. Garcia vs Morales 2 is valid for the WBA and WBC light welterweight titles; in their first fight Garcia defeated Morales by unanimous decision (March 24, 2012). Watch the video!

Alternative video (this is a free embeddable video hosted on Vk.com and it was not uploaded by AllTheBestFights, to report it please visit this link where the video is hosted)