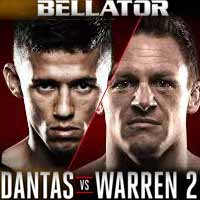 Review by AllTheBestFights.com: 2016-12-02, some good single shots but it is not enough to get three stars: Eduardo Dantas vs Joe Warren 2 gets two.

The Bellator Bw champion Eduardo Dantas entered this fight with a professional mma record of 18-4-0 (56% finishing rate) and he is ranked as the No.5 bantamweight in the world (currently the #1 in this division is Dominick Cruz). He lost to Joe Warren in their first fight in 2014 (=Dantas vs Warren) but then he has won over Mike Richman (=Dantas vs Richman) and Marcos Galvao (=Galvao vs Dantas 2).
His opponent, the former Bellator Fw and Bw champion Joe Warren, has an official record of 14-5-0 (36% finishing rate) and he entered as the No.16 in the same weight class. He has fought twice in 2016 losing to Darrion Caldwell (=Warren vs Caldwell) and beating Sirwan Kakai (=Warren vs Kakai). ‘DuDu’ Dantas vs Warren 2, main event of Bellator 166, is valid for the Bellator bantamweight title (Dantas’ first defense). Watch the video and rate this fight!