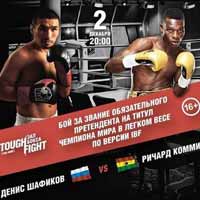 Denis Shafikov entered this fight with a professional boxing record of 37-2-1 (20 knockouts) and he is ranked as the No.10 lightweight in the world. He lost to #1 Rances Barthelemy last year (=Barthelemy vs Shafikov) but he came back to win against Jamel Herring in 2016 (=Shafikov vs Herring).
His opponent, Richard Commey, has an official record of 24-1-0 (22 KOs=92%) and he entered as the No.15 in the same weight class. He has fought twice in 2016 beating Anzor Gamgebeli and losing to Robert Easter Jr (=Easter Jr vs Commey). Shafikov vs Commey is the main event of the evening. Watch the video and rate this fight!