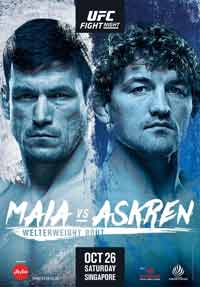 Review by AllTheBestFights.com: 2019-10-26, fight not so exciting between Beneil Dariush and Frank Camacho: it gets two stars (UFC Performance of the Night).

The black belt in Bjj Beneil Dariush entered this fight with a professional mma record of 16-4-1 (62% finishing rate) and he is ranked as the No.19 lightweight in the world. He lost to Alexander Hernandez last year but then he has won over Thiago Moises and Drew Dober (Beneil Dariush vs Drew Dober).
His opponent, Frank Camacho, has an official record of 22-7-0 (86% finishing rate) and he entered as the No.139 in the same weight class. He lost two consecutive bouts last year, against Drew Dober (Drew Dober vs Frank Camacho) and Geoff Neal, but then he came back to win with Nick Hein in 2019. Dariush vs Camacho is on the undercard of Demian Maia vs Ben Askren – UFC Fight Night 162 (UFC on ESPN+ 20). Watch the video and rate this fight!