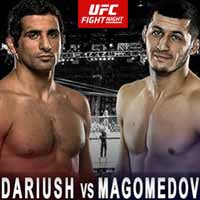 Review by AllTheBestFights.com: 2016-11-05, close fight but not so exciting: Beneil Dariush vs Rashid Magomedov gets two stars.

The black belt in Bjj Beneil Dariush entered this fight with a pro mma record of 13-2-0 (69% finishing rate) and he is ranked as the No.13 lightweight in the world. He has fought twice in 2016 losing to Michael Chiesa and winning over James Vick.
His opponent, the former M-1 Global Ww champion Rashid Magomedov, has a record of 19-1-0 (47% finishing rate) and he entered as the No.15 in the same weight class. He suffered his only loss in 2010 when he faced Magomedrasul Khasbulaev (via split decision), since then he has won 12 consecutive bouts beating Elias Silverio in 2014 (=Magomedov vs Silverio) and Gilbert Burns in 2015 (=Magomedov vs Burns). Dariush vs Magomedov is on the undercard of Rafael dos Anjos vs Tony Ferguson – UFC Fight Night 98 – Tuf Latin America 3 Finale. Watch the video and rate this fight!