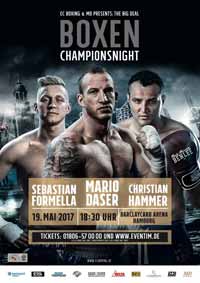 Review by AllTheBestFights.com: 2017-05-19, pretty good fight between Ola Afolabi and Mario Daser: it gets three stars.

The undefeated Mario Daser entered this fight with a perfect boxing record of 12-0-0 (5 knockouts) while his opponent, Ola Afolabi, has an official record of 22-5-4 (11 knockouts). Daser fought twice last year beating Aleksandar Todorovic and Drazan Janjanin while Afolabi fought just once losing to Marco Huck (=Afolabi vs Huck 4). Mario Daser vs Ola Afolabi is valid for the vacant IBO International and WBO European cruiserweight titles. Watch the video and rate this fight!