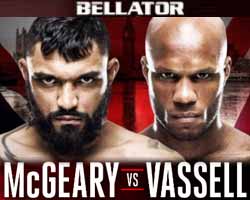 Review by AllTheBestFights.com: 2017-05-19, good fight between Liam McGeary and Linton Vassell: it gets three stars.

The former Bellator light-Hw champion Liam McGeary entered this fight with a mma record of 12-1-0 (92% finishing rate) and he is ranked as the No.9 light heavyweight in the world (currently the #1 in this division is Jon Jones). He suffered his only loss when he faced Phil Davis in 2016 (=McGeary vs Davis); after this bout he has beat Brett McDermott (=McGeary vs McDermott).
His opponent, Linton Vassell, has an official record of 17-5-0 (76% finishing rate) and he entered as the No.11 in the same weight class. He lost to Muhammed ‘King Mo’ Lawal in 2015 (=Lawal vs Vassell) but then he has won over Emanuel Newton (=Newton vs Vassell 2) and Francis Carmont (=Vassell vs Carmont). Linton Vassell vs Liam McGeary is on the undercard of Rory MacDonald vs Paul Daley – Bellator 179. Watch the video and rate this fight!

(Free embeddable videos hosted on Ok.ru and not uploaded by AllTheBestFights)