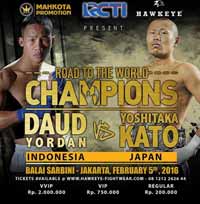 Review by AllTheBestFights.com: 2016-02-05, some good exchanges between Daud Yordan and Yoshitaka Kato but it is not enough to get three stars: it gets two.

The former IBO Fw champion Daud ‘Cino’ Yordan entered this fight with a pro boxing record of 34-3-0 (24 knockouts) and he is ranked as the No.22 lightweight in the world. He suffered his last loss when he faced Simpiwe Vetyeka in 2013 (=Yordan vs Vetyeka), after this bout he has won four consecutive fights.
His opponent, Yoshitaka Kato, has a record of 29-6-1 (9 knockouts) and he entered as the No.28 in the same weight class. He fought just once last year losing to Ricky Sismundo. Yordan vs Kato is valid for the WBO Asia Pacific lightweight title. Watch the video and rate this fight!