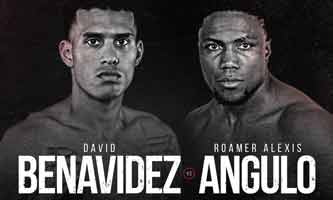 Review by AllTheBestFights.com: 2020-08-15, pretty good fight between David Benavidez and Roamer Alexis Angulo: it gets three stars.
The undefeated Wbc super-Mw champ David Benavidez entered this fight with a perfect boxing record of 22-0-0 (19 KOs=86%) and he is ranked as the No.3 super middleweight in the world (currently the #1 in this division is Daniel Jacobs). In his last three fights he has beat Ronald Gavril (David Benavidez vs Ronald Gavril II), J’Leon Love (David Benavidez vs J’Leon Love) and Anthony Dirrell (Anthony Dirrell vs David Benavidez).
His opponent, Roamer Alexis Angulo, has an official record of 26-1-0 (22 KOs=85%) and he entered as the No.28 in the same weight class. He suffered his only loss when he faced Gilberto Ramirez in 2018 (Gilberto Ramirez vs Roamer Alexis Angulo), since then he has won over Reinaldo Gonzalez, Javier Gomez Rueda and Anthony Sims Jr. Angulo vs Benavidez is valid for the WBC super middleweight world title (Benavidez’s first defense). Watch the video and rate this fight!