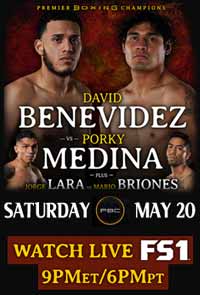 Review by AllTheBestFights.com: 2017-05-20, good fight between David Benavidez and Rogelio Medina: it gets three stars.

The undefeated David Benavidez entered this fight with a perfect record of 17-0-0 (16 KOs=94%) and he is ranked as the No.29 super middleweight in the world. In his last three fights he has beat Francy Ntetu, Denis Douglin and Sherali Mamajonov.
His opponent, Rogelio Medina, has an official boxing record of 37-7-0 (31 KOs=84%) and he entered as the No.26 in the same weight class. He fought twice last year losing to James DeGale (=DeGale vs Medina) and defeating Ramon Olivas. David Benavidez vs Rogelio Medina is the final eliminator for the WBC super middleweight title. Watch the video and rate this fight!