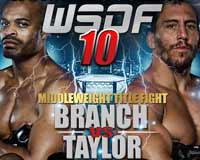 Review: 2014-06-21, David Branch vs Jesse Taylor gets three stars thanks to a good finish. The balck belt in Bjj David Branch entered this fight with a professional mma record of 13-3-0 (54% finishing rate) and he is ranked as the No.24 middleweight in the world, he suffered his last defeat in 2012 when he faced Anthony Johnson (=Johnson vs Branch), after that bout he has fought and won three times beating Dustin Jacoby, Paulo Filho (=Branch vs Filho) and Danillo Villefort (=Branch vs Villefort).
His opponent, Jesse Taylor, has an official record of 27-9-0 (70% finishing rate) and he entered as the No.20 in the same weight class, he also lost his last bout in 2012, against Gael Grimaud, since then he has collected seven consecutive wins. Branch vs Taylor, main event of World Series of Fighting 10, is valid for the WSOF middleweight title. Watch the video and rate this fight!