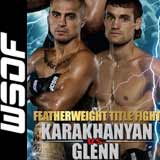 Review: 2014-06-21, great fight between Georgi Karakhanyan and Rick Glenn: it gets three stars. The black belt in Brazilian jiu-jitsu Georgi Karakhanyan entered this fight with a pro mma record of 23-3-1 (74% finishing rate) and he is ranked as the No.15 featherweight in the world, he suffered his last defeat in 2011 when he faced Patricio Freire at Bellator 37; since then he has fought nine times winning the Wsof Fw title in his last bout against Lance Palmer (=Karakhanyan vs Palmer).
His opponent, Rick Glenn, has a record of 14-2-1 (86% finishing rate) and he entered as the No.43 in the same weight class, he lost his last bout in 2010 facing Lonnie Scriven, since then he has collected 11 victories and one draw. Karakhanyan vs Glenn is valid for the WSOF featherweight title (Karakhanyan’s first defense); undercard of David Branch vs Jesse Taylor – WSOF 10. Watch the video and rate this fight!