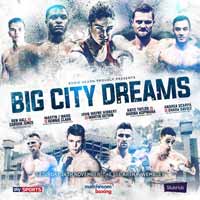 Review by AllTheBestFights.com: 2016-11-26, fight not particularly good between Ohara Davies and Andrea Scarpa: it gets two stars.

Andrea Scarpa entered this fight with a pro boxing record of 20-2-0 (10 knockouts) and he is ranked as the No.26 super lightweight in the world. He suffered two losses in 2011 but since then he has collected 19 consecutive wins beating John Wayne Hibbert in 2016.
His opponent, the undefeated Ohara Davies, has a record of 13-0-0 (11 KOs=85%) and he entered as the No.92 in the same weight class. He has already fought four times in 2016 defeating Zoltan Szabo and Chaquib Fadli in his last two. Scarpa vs Davies is valid for the WBC Silver super lightweight title (Scarpa’s first defense); undercard of John Wayne Hibbert vs Martin Gethin. Watch the video and rate this fight!